For the past year, we’ve been sponsoring one of Guide Dog UK’s lovely pups; Zeb and giving you regular updates on his training progress. Although he has been showing great promise, Zeb has recently been showing signs of nervousness when out with his trainer. His puppy supervisor has been working hard to increase his confidence but felt that ultimately it was in Zeb’s best interest and the interest of any potential owner that he retired from training.

We’re gutted to be saying bye to Zeb but we’re sure he’ll settle into his new home just fine.
Even though Zeb has been rehomed, we still wanted to support Guide Dogs UK. Instead, we’ve chosen to sponsor Ava, a labradoodle living in Kent with owner Lynn and her German shepherd, Trudy.
In basic training, Ava has responded extremely well to basic commands like ‘sit’ and ‘stay’ and has been great at obedience from an early age. She’s a very sociable pup and enjoys regular outings to the local high street as well as visiting London.
Ava c 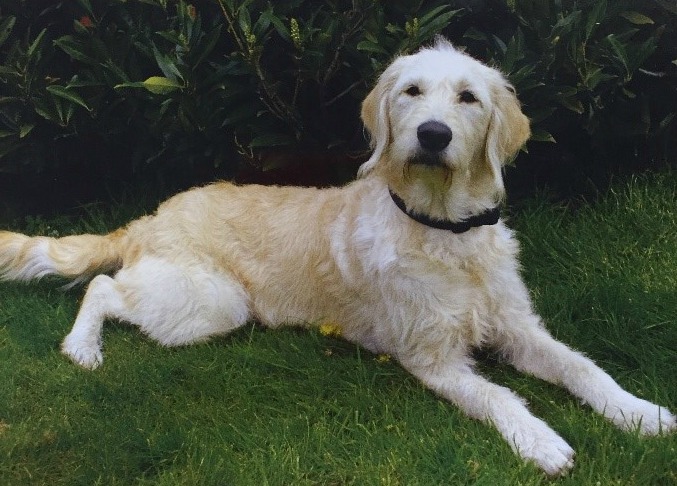 ompleted her puppy walking with flying colours and is now at her local training school. She’s settled in well to the kennels, which she shares with another Labrador called Victor. Her trainer, Georgia has been working on clicker training and says “she walks really nicely at heel and we’ve been practising lots of turns to make sure she stays focused on the lead”.
Very sociable dogs can be a handful and it seems Ava is no exception. She often jumps up at people so her trainers are working hard to encourage her out of the habit and to focus her energy on work and exercise. Georgia says Ava absolutely loves squeaky toys and are a great incentive.
Over the next few weeks, the two will continue training and a harness will be introduced. Then they’ll progress to training offsite in quiet areas where they can practice stopping at kerbs and avoiding obstacles before moving on to more demanding environments.
Although it’s a steep learning curve we’re sure Ava is up to the job and will help to change the life of someone with sight loss. Keep an eye out on our blog over the next few months to find out where Zeb will be rehomed and to find out how Ava gets on in training.